The management of the vast quantities of municipal solid wastes (MSW) that we generate daily is one of the major environmental challenges of our society. Many are the initiatives and projects that are being initiated to transform waste into resources following the premises of the circular economy. Taking advantage of the recent news about the launch of the project WASTE2BIO, we are going to approach to an interesting proposal to valorize the organic fraction of the MSW.

PERSEO Bioethanol® is an innovating technology, developed by IMECAL, to transform the organic fraction of the MSW into ethanol and an organic solid of high heating power able to generate thermal and electric energy (CHP) or biomethane and biofertilizer (anaerobic digestion).

IMECAL started the PERSEO project in 2003 with the cooperation of CIEMAT, Ford España and different scientific teams nationally and internationally. Three years after, IMECAL built a pilot plant in its L´Alcúdia facilities. The plant had the purpose of validate and demonstrate the process and determine its profitability at preindustrial scale. 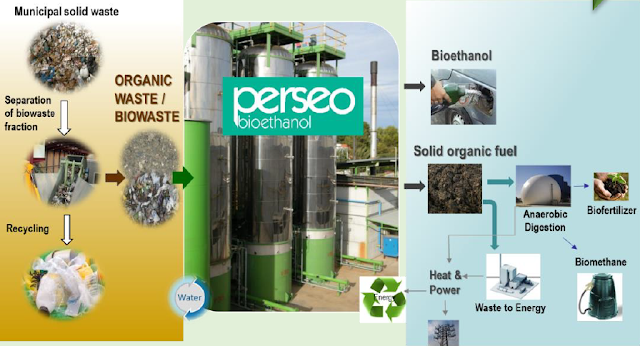 The demonstration plant is fitted with the reactors, fermenters, separation and distillation units required to obtain bioethanol from the organic fraction of the MSW. It also has analytical support labs. The process is designed to work continually and comprise the following stages:
1. The feedstock is subjected to a pretreatment to remove the inert materials contained in the organic fraction of the MSW, such as stones, plastics, metals, glasses…
2. Through thermochemical hydrolysis with diluted acid, cellulose and hemicellulose are solubilized.
3 After the hydrolysis of the substrate, a simultaneous saccharification and fermentation (SSF) process is carried out. The saccharification of the cellulose and the fermentation of the glucose to ethanol happen in the same fermenter, adding enzymes, yeasts and nutrients to the efficient conversion of sugar into ethanol. Enzymes are provided by Novozymes.
4. The broth obtained is distillated and dehydrated to concentrate the ethanol produced by fermentation.

During the demonstration stage, improvements have been implemented in the process and the pilot plant. The processing capacity has been increased until reaching 25 tons per day with yields of bioethanol conversion higher than 75%. The technology is totally compatible with existing MSW treatment plants and it is possible to deploy it before incineration, anaerobic digestion and composting, due to its compact modular design. In this way, waste treatment value chain grows and the economical results of the management improve.

Currently, studies are being performed to include the process in MSW facilities at industrial level. Moreover, IMECAL is participating in projects intending to take the process to the next level. One of them is the WASTE2BIO project that will be introduced in the following section. The other one is URBIOFIN project (BBI JU 2016, DEMO) that will be launched soon. In both projects, investments will be made to improve the existing plant and introduce new modules for the integral valorization of the wastes.

The WASTE2BIO project started last month with the kick-off meeting held in the IMECAL facilities. Main data about the project are summarized in the next table.


Acknowledgements: I would like to express my appreciation to Caterina Coll (CFO and Innovation Manager at IMECAL) for her kind collaboration.
BIOETHANOL BIOREFINERIES_PILOT_DEMO MSW NEWS_EUROPE R&D_PROJECTS

Versión en Español Type of post: Fact sheet. Series: Biobased chemicals – Alcohols. Publication date: 01/06/2021. Last update: 11/06/2021. Description - Diol with 4 carbon atoms. - It is a colourless, viscous liquid. Applications - In the presence of phosphoric acid and high temperature, it dehydrates to the tetrahydrofuran (THF), which is used in various industrial applications such as a solvent in pharmaceuticals. Half of the BDO consumption is used for production of THF. - The second largest market for BDO is the synthesis of γ-butyrolactone (GBL). GBL is used in industrial cleaning products and in the production of Methylpyrrolidone (NMP) and 2-pyrrolidone. - Polybutylene terephthalate (PBT) is produced by polymerising terephthalic acid and BDO. PBT is an engineering plastic is used in a wide range of applications, mainly in electrical and automotive component. Conventional petrochemical routes (1) - Reppe process (acetylene): 42% of global capacity. - Davy Process (maleic anhyd
Read more 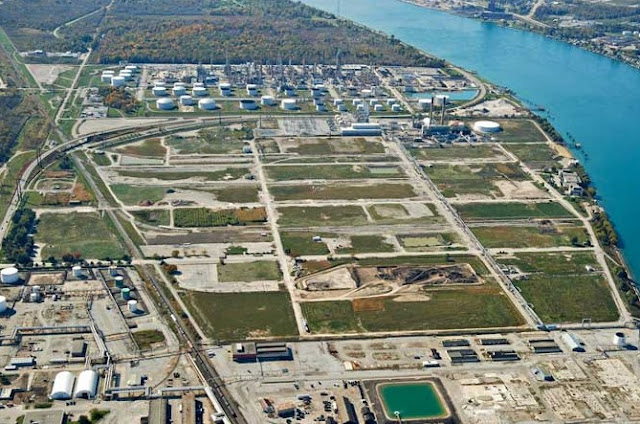 Publication date: 16/11/2015 Last update: 20/02/2016 Description 1,2 Levulinic acid (also known as 4-oxopentanoic acid or γ-ketovaleric acid) is an organic compound with chemical formula C 5 H 8 O 3 . It is a white crystalline solid soluble in water and polar organic solvents. It contains ketone and a carboxylic group whose presence results in interesting reactivity patterns. It is one of the more recognized Biobased Chemical Building Blocks , a starting material for a wide number of compounds (see Applications below). In fact, it was recognized by the US DoE as one of the top biobased platform chemicals of the future and it can successfully address many performance-related issues attributed to petroleum-based chemicals and materials. Process technologies 1,3,4,5 The controlled degradation of C6-sugars by acids is the most widely used approach to prepare levulinic acid from lignocellulosic biomass. Other methods have also been studied, for instance, the hydroly
Read more 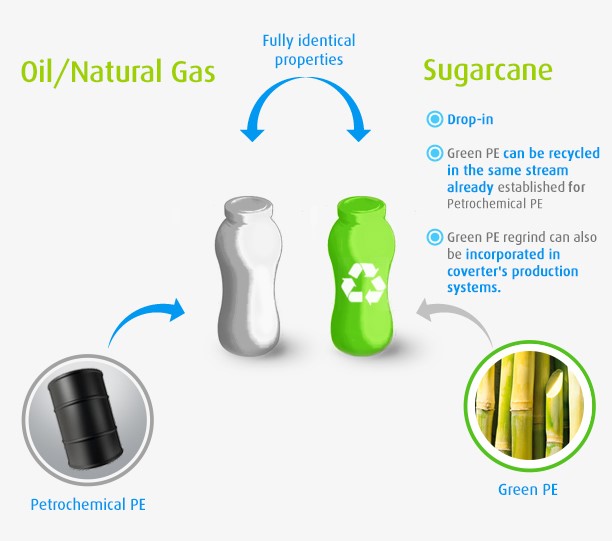 Versión en Español Section: BIOBASED PLASTICS Series: Biobased Vinyl Polymers. - Biobased Polyethylene (bio-PE). Biobased Polyethylene (bio-PE) / Green Polyethylene / Renewable Polyethylene - Its biobased carbon content can reach 100%. - Renewable resource . It is produced from renewable biomass feedstocks as sugars or vegetable oils. - It reduces GHG emissions. Each ton produced captures and sequesters CO 2 from the atmosphere. - 100% drop-in . Chemically identical to its petrochemical counterpart. It has the same processing characteristics as fossil PE, therefore, it can be processed in the same equipment. - Non-biodegradable . It cannot be composted or biodegraded. - Thermoplastic . It can be molten and remoulded into the desired shape. - It can be recycled and processed into new bio-PE products using conventional technologies without requiring additional investments. - Building block or monomer: biobased ethylene .
Read more

Versión en Español Section: ADVANCED BIOFUELS Series: HVO - Hydrotreating (HVO) – Concepts, feedstocksand specifications - Hydrotreating (HVO) – Advantages over FAME and properties - Hydrotreated Vegetable Oils (HVO) Biorefineries – The rise of renewable diesel - Posts: HVO Hydrotreating is an alternative process to esterification to produce diesel from biomass. Traditionally, diesel components produced from vegetable oils are made by an esterification process. In fact, HVO are commonly referred to as renewable diesel or green diesel in order to distinguish from Fatty Acid Methyl Esters (FAME), best known as biodiesel. Other acronyms are also used depending on the feedstock, such as Rape Seed Methyl Ester” (RME), “Soybean Methyl Ester” (SME), “Palm Oil Methyl Ester” (PME) or “Used Cooking Oils Methyl Ester (UCOME). In the HVO production process, hydrogen is used to remove the oxygen from the triglycerides and does not produce any glycerol as a side product. Additi
Read more